Several Important Details You May Need to Know About the Helipad

The geometric form of the helipad can be divided into round, square and rectangular.

According to national standards, helicopters are usually divided into five categories: small, light, medium, large and heavy. The maximum take-off weight of a small helicopter is below 2 tons, a light helicopter is 2 tons to 4 tons, a medium helicopter is 4 tons to 10 tons, a large helicopter is 10 tons to 20 tons, and a heavy helicopter is greater than 20 tons.

The design of a helipad usually involves the design of flight procedures and the design of road construction drawings. According to the latest requirements of the Civil Aviation Administration, no mandatory requirements are imposed on the design of flight procedures (for details, refer to the rules and regulations of the regional administrations). As for the design of the construction drawings of the helipad field, it mainly includes five major parts: general drawing engineering, flight area engineering, navigational lighting engineering, water supply and drainage, fire protection engineering, and auxiliary facilities engineering. Helicopter apron design qualifications are different from ordinary industrial and civil design qualifications, and designers must have legitimacy. In addition, the navigation aid lighting system used by the apron is a special equipment for civil airports. According to the latest requirements of the Civil Aviation Administration, it must obtain a qualified inspection report issued by the inspection center designated by the Airport Department of the Civil Aviation Authority before it can be used in the apron.

Due to functional requirements, most aprons must be on standby 24 hours a day, especially hospitals and other aprons that are included in the emergency rescue support system. In order to ensure the normal use at night, the helipad should provide floodlighting, touchdown and lift-off area light, the approach lights of the approach takeoff area, and the aviation obstruction lights. When the apron is circular, the peripheral lights should not be less than 8. When the apron is rectangular or square, the boundary lights on either side should not be less than 5, and the spacing of the above peripheral lights should not be greater than 3 meters. The navigation lights should be installed in two directions of the apron, with no less than 5 in each direction, and the distance can be 0.4m~0.6m. The floodlight should be installed in the opposite direction of the apron and navigation lights. For obstacles in and out of the airspace, aviation obstruction lights should also be installed. The lighting power supply should be a fire circuit, and when it is set separately, it should be considered that it can supply power for 4 hours continuously. 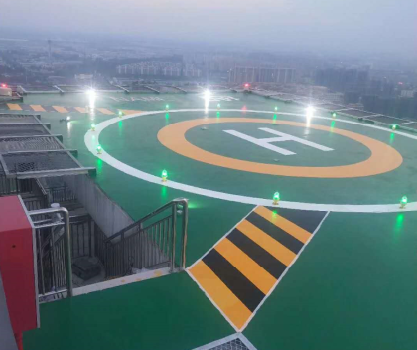 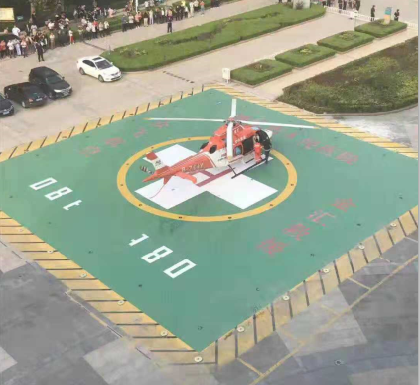 First, the helideck visual navigation aids are composed as follows:

2) Floodlights are used for helicopters to take off and land at night or when the weather is dark, but the lights must not be too strong or dazzling.

3) Aviation obstruction lights serve as warnings and are used at the boundary of the helipad for warning of obstacles.

4) The heliport light beacon guides the pilot to determine the location of the helipad under complex weather conditions such as low visibility for helicopter takeoff and landing. According to international signal standards, its blinking speed is 0.8 seconds, 1.2 seconds, and 0.8 seconds, and it can also meet the needs of drivers, reducing the light intensity from 100% to 10% or 3%. In addition, there are certain requirements for the spacing, luminous color and chromaticity of the apron boundary lights, and the angle light source of the side lights must also meet the relevant national standards.

5) The wind cone is used by the pilot to obtain basic information such as the wind direction and wind speed of the helipad, so as to determine the direction of the helicopter taking off and landing.

6) Visual slope indicator, a device that guides pilots to approach the helipad safely to ensure that the helicopter is on the correct glide path.